Home / Training
This page may contain affiliate links. We earn commissions when you purchase through these links. Learn more 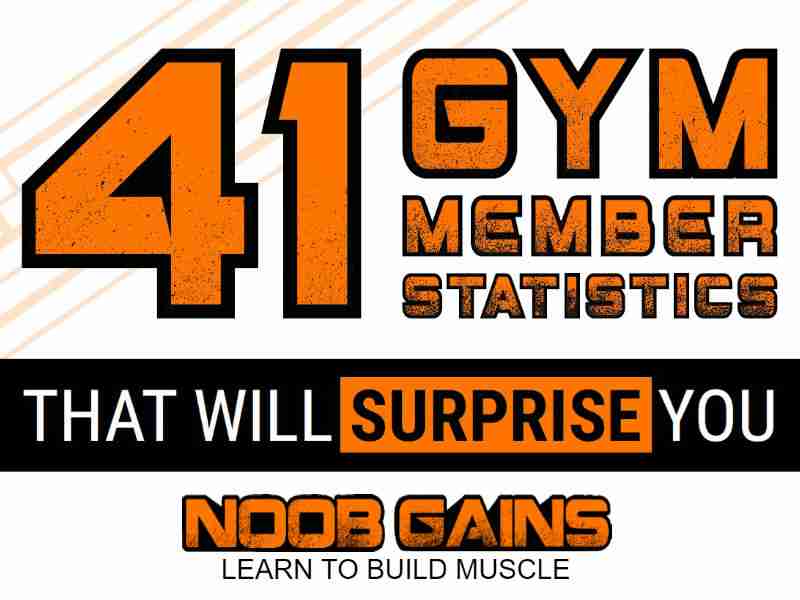 In the last decade, popular gyms in the U.S. have seen significant growth. But is it due to a sudden ambitious surge towards fitness? Or have gyms become more in tune with the real intentions of their potential members?

Every January, a whole new flurry of New Year’s Resolution memes and jokes circulate the internet,  so how is your local gym actually responding to new members (and current ones)?

Here are 41 surprising gym membership facts and fitness statistics that are shaping the health industry.

As you can see, January is notoriously the busiest time of the year for not only gym owners, but personal trainers, supplement companies, and other individuals and facilities that operate in the fitness industry.

Unfortunately, you can’t count on members who join early in the year to actually follow through with their goals and show up consistently since they drop out within only a few months of joining.

And the last fitness statistic in this group shouldn’t be a real surprise since dedicated gym members who go more consistently are suddenly waiting in lines for machines and wondering where all the clean towels went in the locker room.

If you’re a current member, try to change up your schedule and go to the gym outside of peak operating hours which is typically much earlier in the day or just before closing.

And if you’re a noob, the best time of year to join a gym is typically near the end of the summer.

But if you want to get started earlier in the year, try to hold off until the end of February (or even March) to avoid the influx and receive more personalized attention from the staff.

Looking at these statistics, it’s shocking that given the high volume of new memberships attained in January thru March, about 50% of those individuals will stop visiting the gym after 6 months of joining. Since inconvenient locations appear to be one of the main dropout causes, it may be in the best interest of new gym owners to consider proximity to their target market more or as important than other decisions when establishing a facility.

Additionally, owners need to be intimately connected with the needs and wants of their market. Since membership cost and quality equipment are also strong factors that affect retention, a gym should consider creative sale promotions, ways to inflate the perceived value of their memberships, and focus on regular equipment maintenance to keep their clients happy. 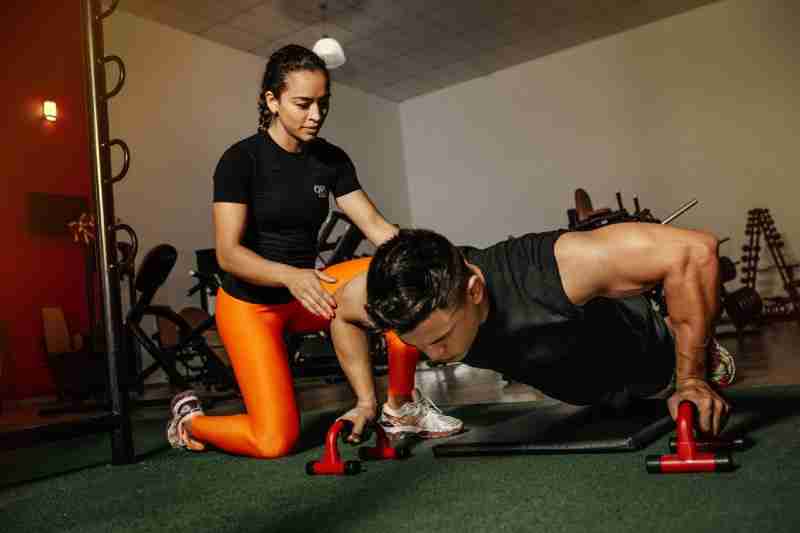 When it comes to gender statistics, men and women join the gym at about the same rate, but men are more likely to form an interest and stick with it.

According to survey data by Coupon Cabin, of all new members who joined, 14% of women and 8% of men quit going within a year. This could be related to the unproportionate amount of gym anxiety that women feel compared to men.

Data provided by the Centers for Disease Control reveals that 49% of women ages 18 and older meet levels of recommended aerobic activity, versus 57% of men.

Gym Member Statistics that Reveal Visit Frequency (And Why)

The fitness industry market research in this section is a little more optimistic since you can see that half of all members who actually go to the gym (even though it’s low) make it almost twice per week.

If your goal is to build muscle like a superhero or get shredded like a fitness model, two workouts per week makes for a slow pace. A better frequency for strength training requires that you hit the gym 3-4 times per week to create your own muscular transformation.

What’s particularly interesting is the correlation between payment frequency and attendance since that infers members are really trying to “get their money’s worth” if they’re paying more often.

And that last statistic about lying should have made you chuckle and wag your finger in disapproval. Results speak for themselves, so in the long run, they’re not fooling anybody. 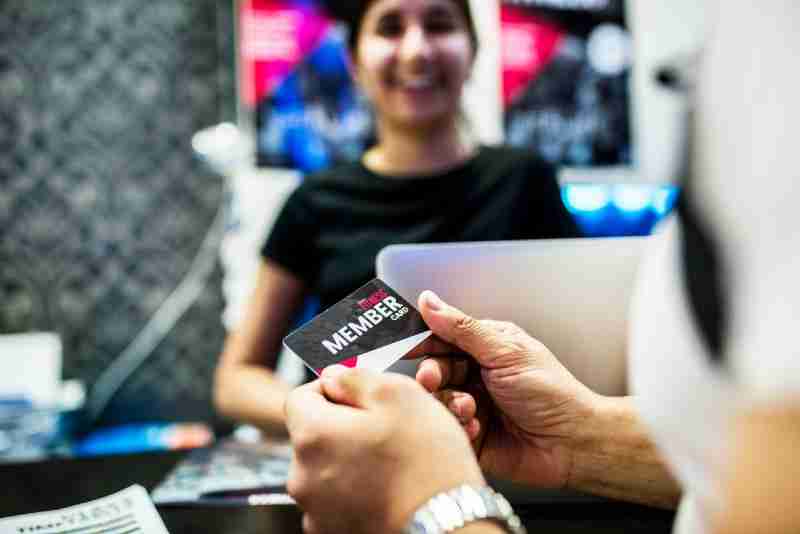 What Time Do Most People Go to the Gym?

Most people go to the gym right before going to the office and after getting out of work. This puts the peak times between 8AM and 10AM and then between 4PM and 7PM. College gyms are typically busier in just the evening since most students struggle to get up earlier. 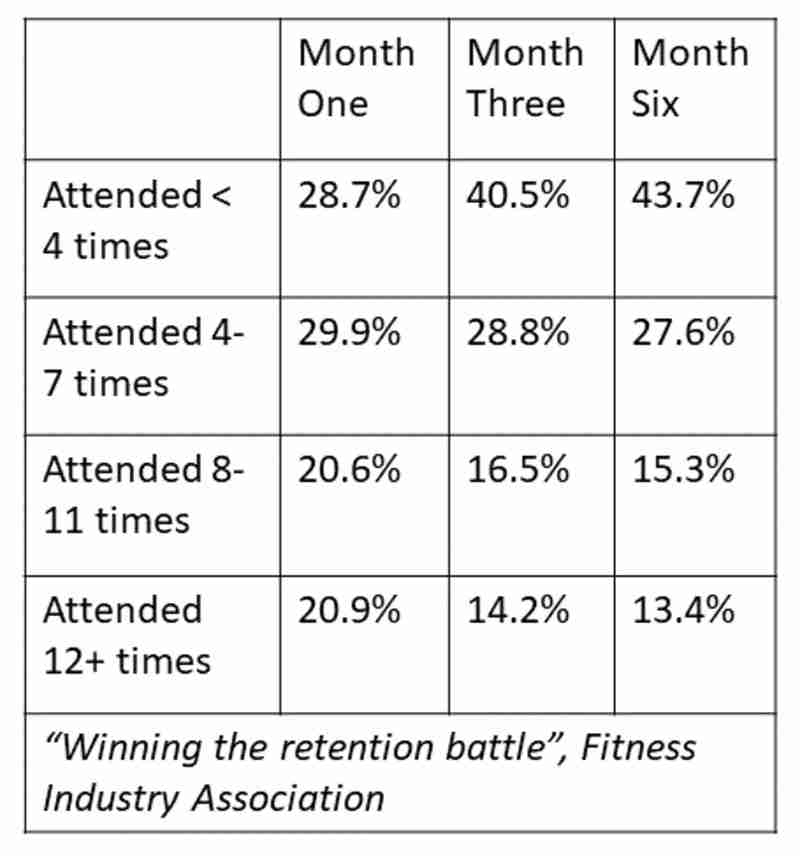 Gym attendance has generally been an issue for owners since the establishment of commercial health clubs. We can see this trend represented in 2001 data reported by the Fitness Industry Association in “Winning the retention battle”. 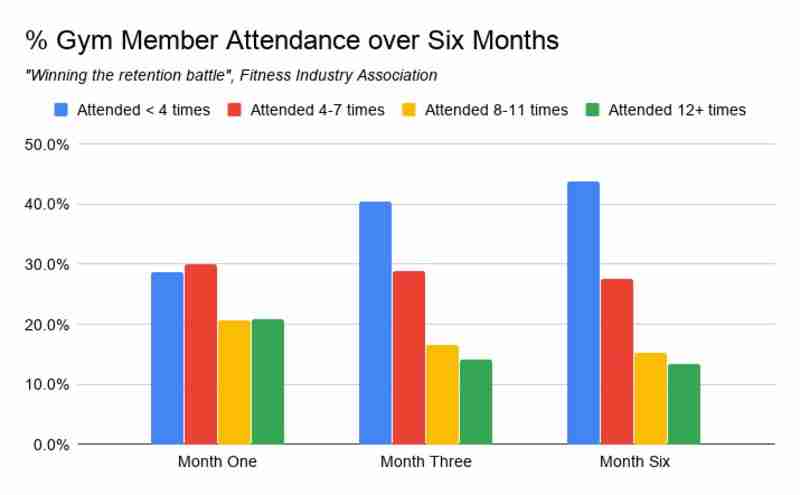 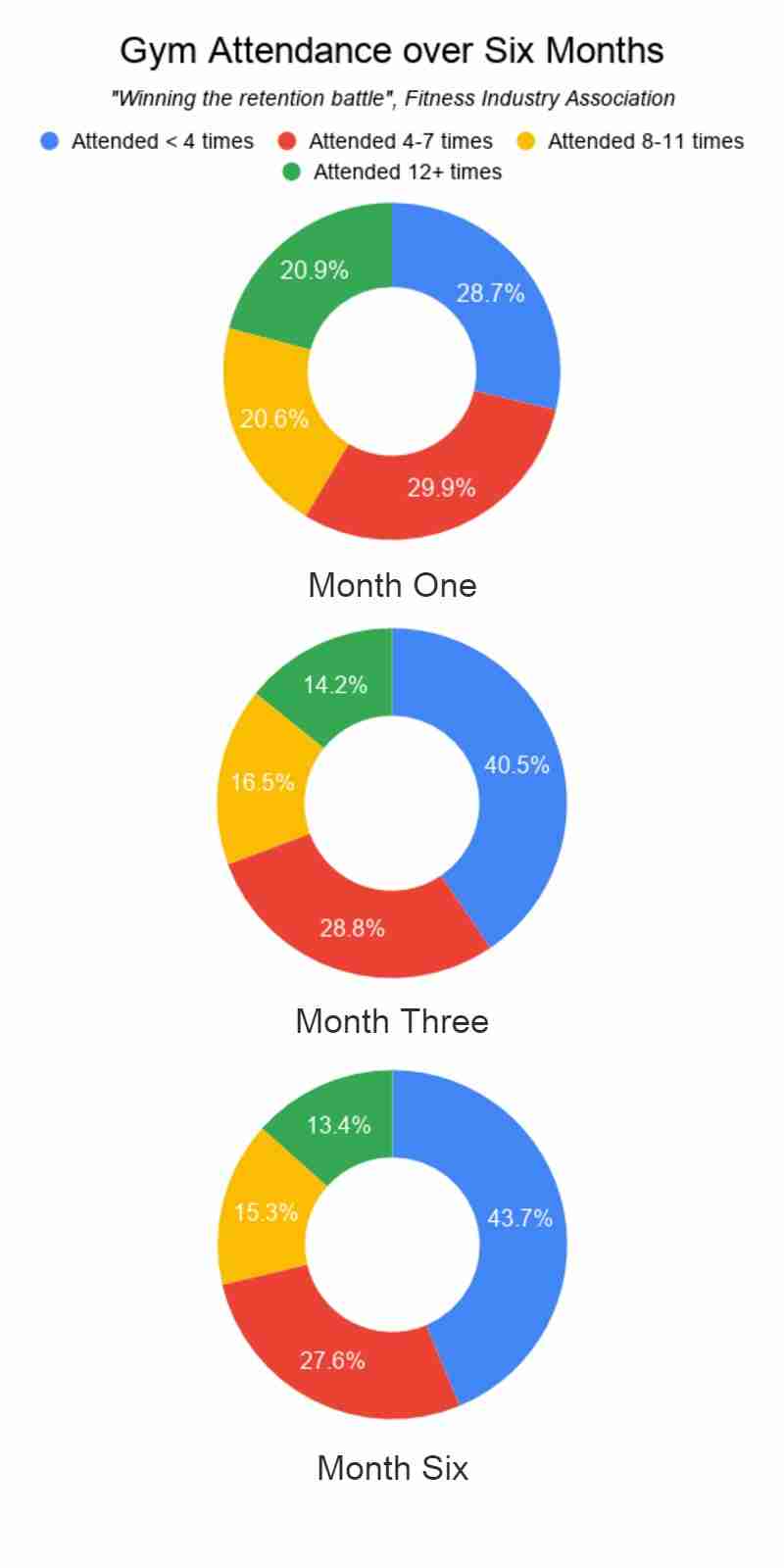 We can obviously conclude that as time goes on, attendance declines. At the end of the first month, only 28.7% of new members will have attended less than once per week. However, this portion increases to over 40% by the six month mark.

This delta comparison tells us that members who visit the gym more often earlier in their membership are more likely to continue visiting the gym six months later. So if you’re considering going to the gym, start strong, make a schedule, and keep yourself accountable to each session. If you’re a club owner that wants to increase attendance, try focusing more energy and resources on engaging new members and drawing them back into the facilities in the first few weeks of joining.

Money Being Thrown at Gyms, Memberships, and the Fitness Industry

The average gym membership cost per month is about $58.

This further supports the competitive pricing strategy of Planet Fitness memberships at only $10/month as opposed to a premium Equinox membership which can be as high as $250/month (not to mention the $300 initiation fees).

But it’s not like us millennials won’t pony up the dough as you can see.

Heck, I actually built my own home gym complete with a power rack, barbell, plates, dumbbells, and thick horse stall mats to protect my floor so I know what it means to invest. Plus, there’s been a rise in the investment in personal education like an Athlean-X or a Kinobody fitness program for example.

Fitness & Workout Stats (Why Do People Go to the Gym?)

What this group of stats reveals is that most members go to the gym to take advantage of the social aspect. Whether it’s getting 1-on-1 guidance with a personal trainer, attending a class, or just chatting up other members, interacting with individuals that share similar values and goals is good for accountability.

Now, scoping out dates and holding town hall meetings in the squat rack might be great for your social life, but your actual fitness results are most likely going to be sub-par over the long term.

A few different things can be learned from these statistics on who actually goes to the gym.

First of all, it’s no surprise that the vast majority of gym members have a goal to get slimmer with the staggering obesity statistics in the U.S. And I sense a bit of entitlement from the research produced by Market Research World when members are more likely to have chocolate than those who don’t. (Maybe they think they earned it more.)

But the statistics on age and income appear to coincide since generally as a person grows older and gains more experience in their career, they tend to earn more money, and direct more focus on their health.

How Many People Have Gym Memberships? 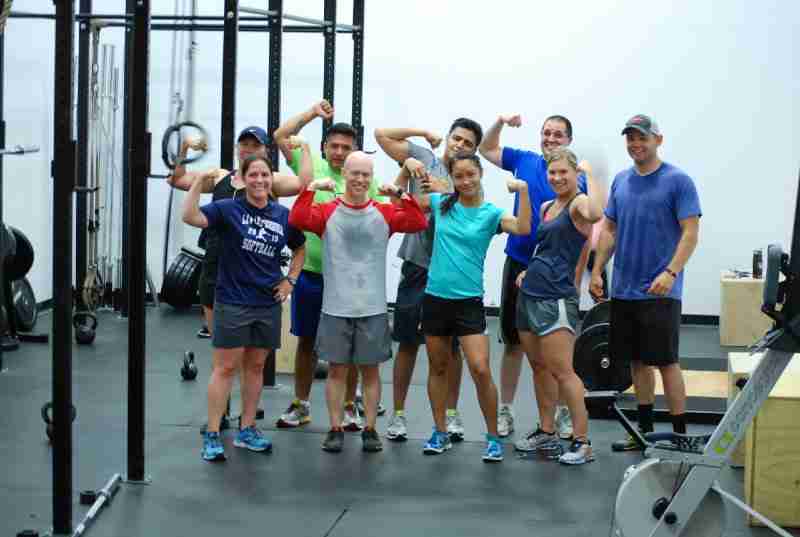 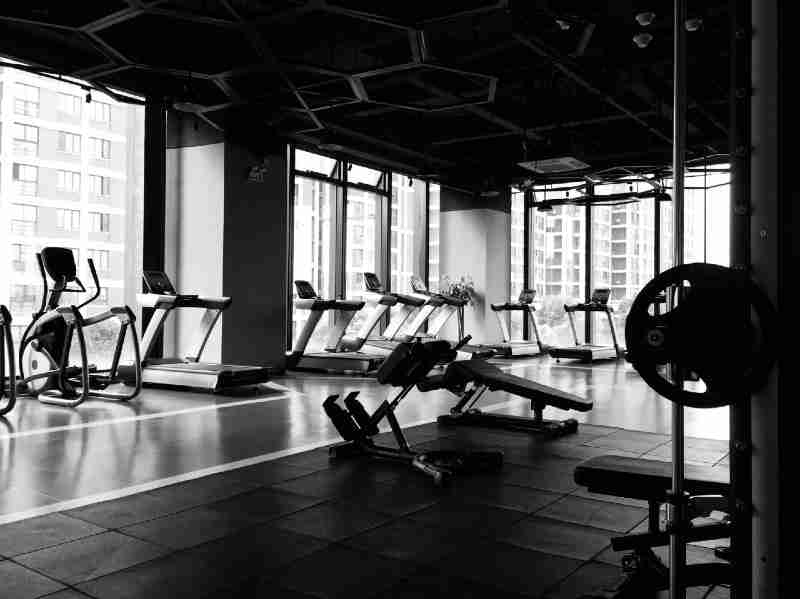 According to data from the IHRSA, about 80% of gym memberships go unused. Data collected by a survey of over 5,300 U.S. gym members conducted by Statistic Brain found this percentage to be closer to 60% with 82% of all members visiting the gym less than once a week.

How Many People Work Out?

According to the CDC, only 23% of U.S. citizens get enough recommended exercise. The Federal physical activity guidelines recommend approximately 150 minutes of moderate exercise or 75 minutes of vigorous exercise per week.

Gym Facility Facts & Statistics (And How They Treat Their Members)

What’s most troubling about these statistics is the fact that gyms actually count on most of their members to not show up so their facility doesn’t experience overflow.

That obviously isn’t a problem since 80% of gym memberships are never used.

And further supporting the social aspect of more casual gyms and their members, you can see that Planet Fitness doesn’t even shy away from feeding their patrons which occurs on a monthly basis.

Finally, it’s interesting to see that over 20% of memberships are actually being used in Colorado whereas that number is cut in half in Alabama.

How Many Gyms are in the U.S.? 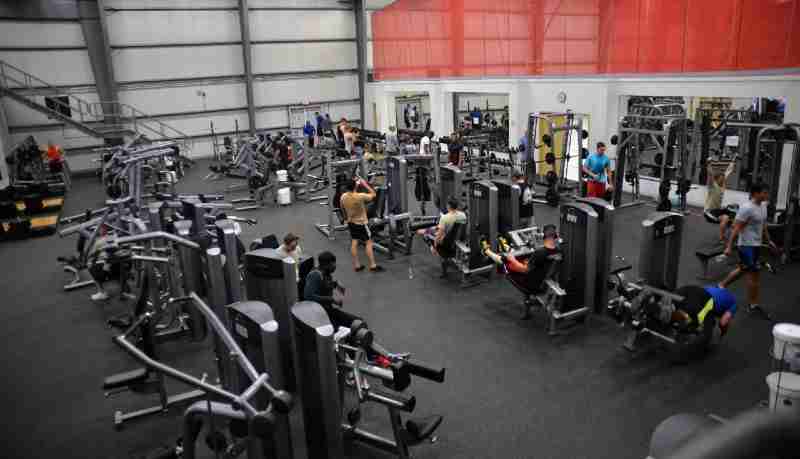 How Many Members Does the Average Gym Have? 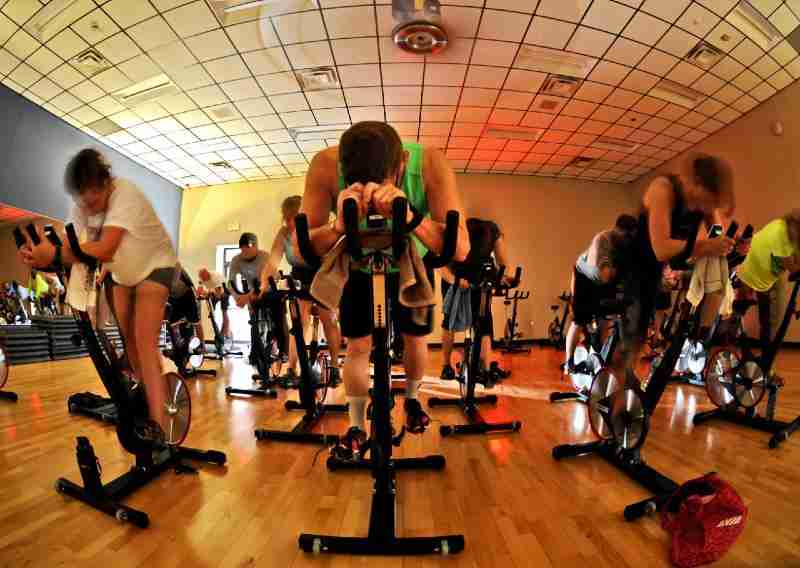 The average gym franchise location typically has 1000-10,000 members, but you don’t see these people because 80% of the memberships go unused. Gyms knowingly sell memberships exceeding their club’s physical capacity to take advantage of this trend. According to Planet Money, Planet Fitness sells about 6,500 memberships per gym, but each facility only has the capacity to accommodate 300 people at once. Similarly, Gold’s Gym has somewhere between 5,000 and 10,000 members per location and they can only handle 300-500 people at once.

How Many Members Does a Small Gym Have?

Small gyms typically have 100-500 members and operate in under 4,000 square feet. Gyms of this size are called “boutique gyms” since their brands thrive on only one or two specific services that they provide like yoga or spin classes. Small gyms often charge premium prices to justify giving more individualized attention to members.

Most of the fitness facts reported so far have pertained to the United States. In this section, we’ll take a look at some gym statistics for other countries and city states.

Based on the U.S. statistics, it’s fair to conclude that the vast majority of people who go to the gym are casual fitness enthusiasts that go mainly just to “hang out”.

Obviously, that’s not what we encourage here at Noob Gains because we actually want our visitors to follow programs that get results.

But… the most popular gym franchises completely understand this, expect it, and attempt to capitalize on it with more cardio equipment, seasonal deals to get more people in the door, and even complimentary refreshments.

Getting in shape isn't easy. But this program gives you a real-life approach to building a leaner, more muscular body without obsessing over fitness 24/7.

Kyle Hoffman is the founder of Noob Gains and has been apart of the fitness industry for over 15 years. Kyle enjoys helping beginners transform their bodies and he eats way too much at street fairs. He's been quoted and mentioned in Huffpost, The Epoch Times, Best Company, How Stuff Works, and Spark People.